The jargon of the illegal prostitution industry is changing. As escort websites like myredbook.com are being exposed as resources for illegal prostitution and getting shut down by the FBI, a new type of “dating” site is rapidly gaining in popularity and emerging as the prostitution platform of the 21st century. Websites that arrange relationships between sugar daddies and sugar babies, scenarios where wealthy gentlemen provide money and other resources to young women in exchange for intimate relations, are turning a considerable profit in their attempt to rebrand illegal prostitution into something slightly more palatable.

This seemingly effective “work around” to avoid being designated as a prostitution-related website has not only caused numerous sugar dating sites to pop up, but also motivated pre-existing online escort directories and punter forums like naughtyreviews.com to remodel and re-imagine their prostitution resource as “dating for sugar daddies and sugar babies.” 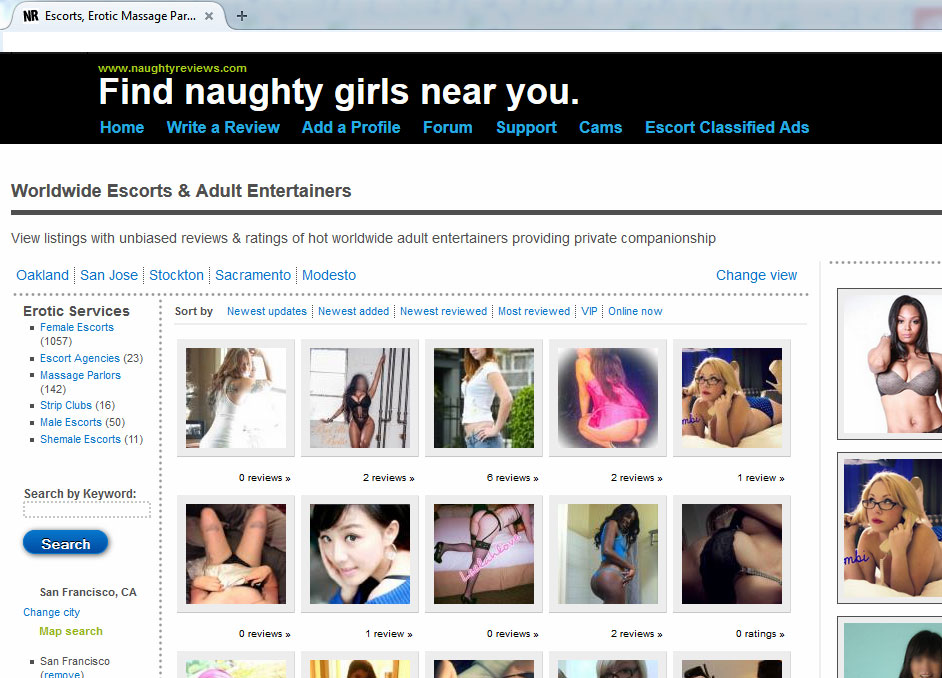 Naughty Reviews, an escort review website promoting prostitution – before they re-positioned themselves as sugar dating. 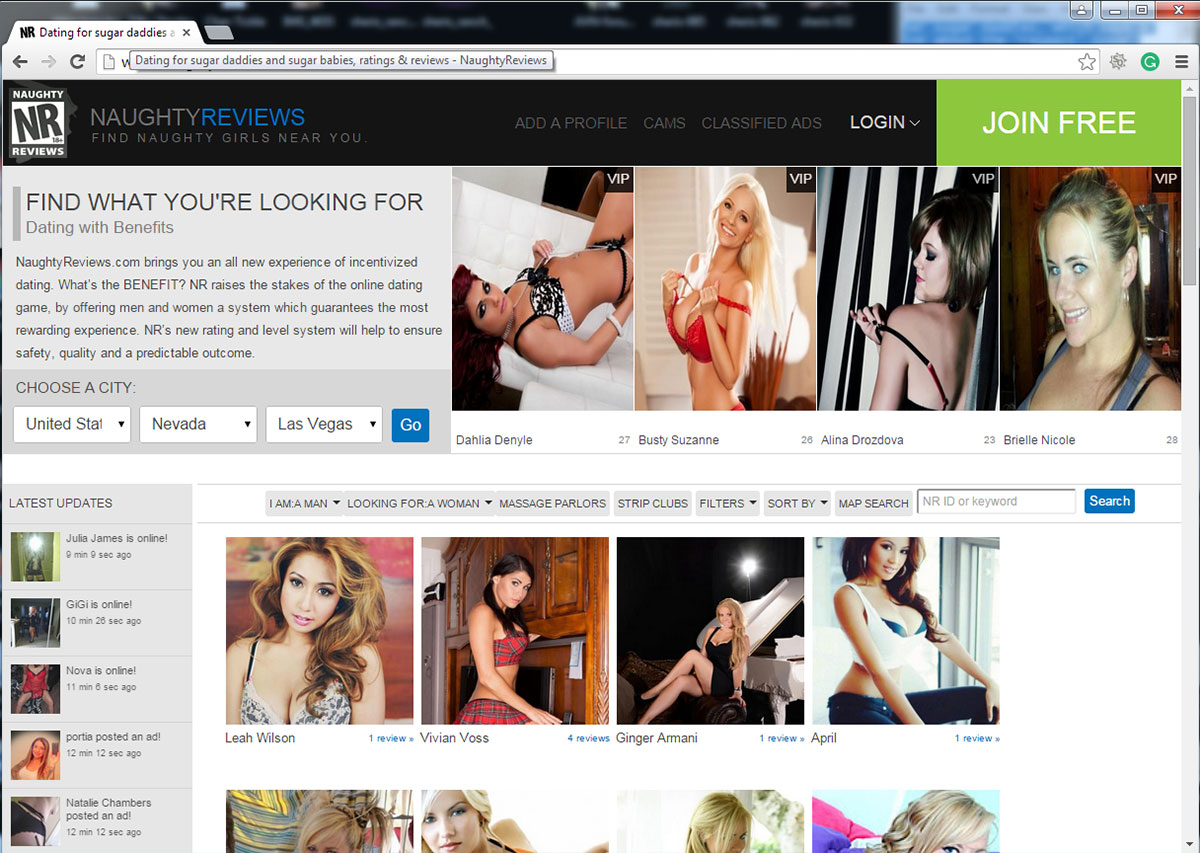 Naughty Reviews current rebrand as a sugar dating site to avoid getting busted like myredbook.com.

The staff and courtesans of Sheri’s Ranch, Nevada’s premier licensed bordello, believe that prostitution should be legal throughout the United States. But until prostitution is regulated across America like it is in Nevada, we cannot support unlawful prostitution. Without state and county regulation, there is an absence of rules and standards in the sex work industry, creating an environment that can too easily exploit underage women, invite human trafficking and violent crime, and allow for the spread of sexually transmitted diseases. This attempt to “sugar coat” illegal prostitution is nothing more than a callous action taken by opportunistic, morally compromised entrepreneurs who appear have found a loophole that will dissuade law enforcement from taking action against them.

Is a Sugar Baby a Prostitute? 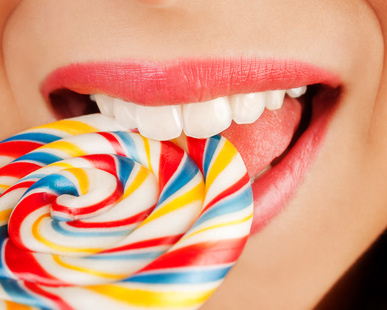 “It’s not prostitution if it happens more than once.”

The company argues that sugar babies aren’t prostitutes because they are in an on-going relationship with their sugar daddy:

A prostitute and a client have a transactional relationship. They meet, exchange funds, and participate in some sort of physical act and part ways. Typically, this is a one time occurrence. A job. There is no relationship, and no possibility for a relationship.

This is inaccurate. While some men seek a prostitute for a wham-bam-thank-you-ma’am roll in the hay, many client-prostitute relationships are on-going and involve companionship that extends beyond sex. The best type of customer for a prostitute, or a sugar baby, is a repeat customer, someone who regularly meets with the woman and consistently provides compensation for her services. An ongoing client-prostitute relationship can last weekends, weeks, months, or years. As long as the client continues to pay for the prostitute’s services the relationship will continue, and just like a sugar daddy/sugar baby scenario, if the money is cut off, the relationship is over.

Another false assumption made by Seeking Arrangement has to do with a sugar baby’s selectivity:

She’s selective about who she dates; a prostitute isn’t picky about who she takes on as a client. The risks involved with prostitution are countless, and include exposure to crime, abuse, sexually transmitted diseases and theft of service.

This is laughable. Many illegal prostitutes use client verification services like date-check.com and preferred411.com and often require references from other working girls before they take on a new client. While it is true that a heroin-addicted street walker will be less selective than a VIP call girl, to suggest that prostitutes are unfussy couldn’t be further from reality.

There are many types of illegal prostitutes. The type most similar to a sugar baby is the high-end escort, a woman who prefers a lower volume of wealthy clients. A sugar baby may not be a “crack whore,” but she’s still a prostitute, just of a classier sort.

“If you’re lucky, a sugar baby might fall in love with you!”

Seeking Arrangement says that another key reason that sugar dating isn’t prostitution is because there’s a chance that a sugar baby might actually become a sugar daddy’s long-term soul mate:

When two people are involved in a mutually beneficial relationship, they respect and value one another’s time. Sugar relationships can turn into long term serious relationships.

This is nonsense. The sugar baby / sugar daddy relationship has about as much of a chance of developing into a life partnership as the relationship between a prostitute and her client. Both situations begin as relationships based on compensation for intimate services, and both situations rarely develop into more than friends with (paid) benefits.

Seeking Arrangement goes on to say that the reason something special might develop between a sugar baby and her sugar daddy is because sugar babies are monogamous:

While an escort might have a sordid sexual history, a Sugar relationship is often monogamous.

This statement is nothing less than an insult to the intelligence of the reader. Alix Tichelman, the most notorious prostitute to use the Seeking Arrangement website, boasted online that she had over 200 clients. Tichelman was also arrested for the murder of one of her sugar daddies, which says a lot about the “respect” sugar babies have for their benefactors.

Seeking Arrangement again attempts to pump up the quality of their sugar babies by stating that sugar babies have long term professional goals, and that sugar daddies are doing a service to the world by investing in a sugar baby’s future:

Most Sugar Babies aren’t solely involved in the sugar world. Sugar Babies are also teachers, college students, actresses, and business professionals. They seek successful mentors that can advance their career, not a temporary fix.

First of all, Prostitutes, like sugar babies, are mothers, students, and professionals. Prostitution is a lifestyle that allows women to supplement their income via a flexible schedule that gives them the freedom to pursue their interests and goals.

Second, this point does nothing to separate the “sugar lifestyle” from the illegality of sex-for-money. It really doesn’t legally matter why someone is a prostitute or whether or not they have long-term goals, it’s still illegal to exchange sex for money in most parts of the United States.

The Only Safe Choice in the United States

The fact that Seeking Arrangement was compelled to address this issue on their website is evidence that the service recognizes how thin the veil hiding the truth is.

Sugar dating sites are the latest online tools used by illegal prostitutes to avoid getting busted by law enforcement. Sugar babies ARE prostitutes. Whether a woman (or, more likely, her pimp) uses backpage.com, craigslist, or seekingarrangement.com to initiate the sex-for-money relationship doesn’t change the cold hard fact that she is a hooker.

Prostitution is illegal nearly everywhere in the United States. As the Alix Tichelman incident proves, sugar baby websites are no safer and no more credible than any other online prostitution resource. The only truly safe, discreet, and trustworthy way to enjoy quality intimacy in exchange for money is in a legal Nevada brothel.